Ubisoft's pirate game Skull and Bones is alive, looking like an adult Sea of Thieves 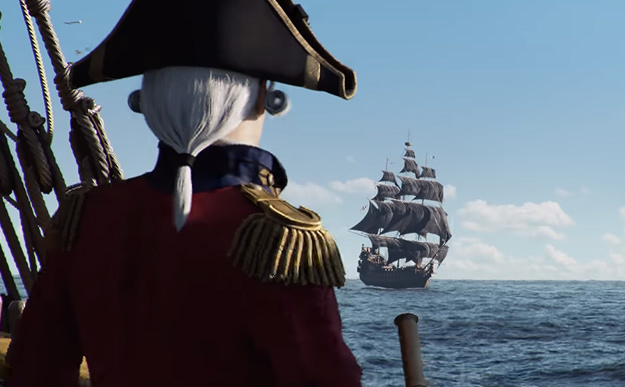 Ubisoft's studio which to the world brought Assassin's Creed 4: Black Flag announced pirate game Skull and Bones in 2017, but we have not heard anything significant about it for a long time. This just got changed at Ubisoft's E3 conference where we got a cinematic and gameplay trailer.

As you can see in the gameplay trailer below, the game looks a bit more concrete than the first display at the E3 last year. Graphically it is very impressive with beautiful, battle damaged ships, smoke, fire, cannons and that wavy sea.

The demo shown at the E3 conference started at one hub location, an island where each character begins its adventure. Sounds familiar? That's how Microsoft Sea of Thieves works, but Ubisoft's game looks adult and more serious than that. First of all because it offers more options to customize the various parts of the ship - from cannon to helm and other equipment. Best of all, any change of this kind will be reflected also in the capabilities of your ship, which suggests that gameplay balance in the background is very complex.

Additionally, unlike the Sea of Thieves where you are controlling a ship together with your friends, Skull and Bones is a game in which each player controls his own ship (no matter how big it is) with the help of a computer-controlled crew. That does not mean you can not sail and rob the seas with a team - in fact, this is a shared world game, everyone will have their own ship instead of playing together on the same.

Skull and Bones releases next year for PC, Ps4 and Xbox One, and before release a beta is also planned.

Does it sound and looks like a game about pirates you've been waiting for? Please comment below.

Nice! I definitly need this game :D
Who does not want to be a pirate?

jediknight16
A wizard is never late

Official Total War blog reveals A Total War Saga: Troy will be FREE to keep on Epic for 24 hrs on day of it's release August 13! READ MORE
Jun 2, 2020
Sludge Life is free until May 28th 2021 on the EpicGamesStore!

Borderlands The Handsome Collection is free until May 28th on the EpicGamesStore! READ MORE
May 28, 2020
Alienware Area-51m Upgrades And Where To Find Them

Alienware Area-51m Upgrades and Where to Find Them READ MORE
May 28, 2020
3th Change Grab a LIMITED Steam Key and join the Test Pilot Program on Project Genesis

BlizzCon added to the list of canceled events this year READ MORE
May 27, 2020
Alienware Rigs Can Get Even Cooler: Introducing PCI-E Liquid-Cooled Graphics to Beat the Heat

Alienware Rigs Can Get Even Cooler: Introducing PCI-E Liquid-Cooled Graphics to Beat the Heat READ MORE
May 12, 2020
Civilization VI is free until May 28th on the EpicGamesStore!